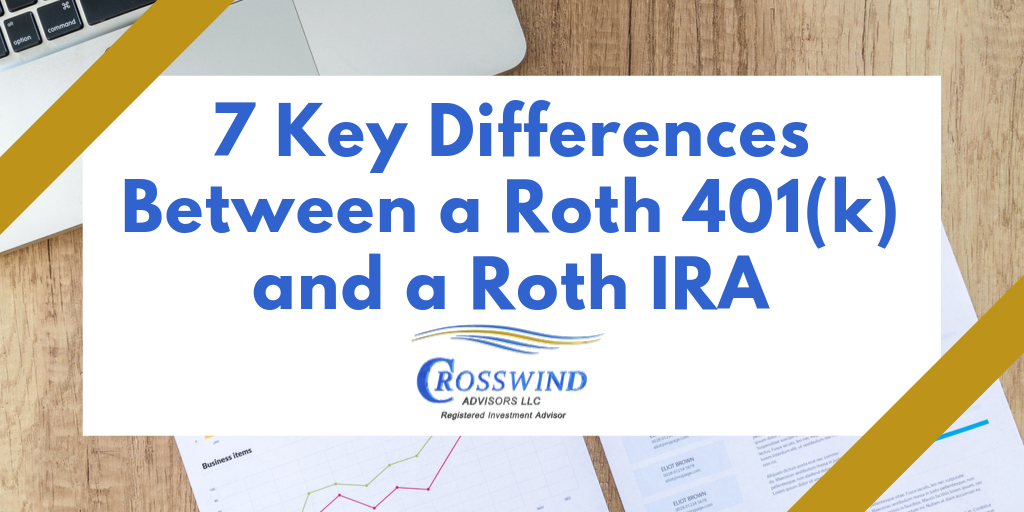 Roth 401(k)s and Roth IRAs share the ultimate goal of tax-free distributions of earnings, but they are governed by different rules along the way. This side-by-side comparison can help determine which vehicle suits your needs best.

Roth 401(k)s and Roth IRAs share the ultimate goal of tax-free distributions of earnings. But while both of these accounts are funded with amounts that have already been taxed, the path to that tax-free goal is paved with different rules for each of these two types of accounts.

As you consider your retirement planning needs, which will likely include adding Roth options for a tax-diversified retirement nest egg, the following overview of the differences might be helpful with determining which Roth account is more suitable.

Contributions to a Roth 401(k) and the Roth IRA do not affect each other. Therefore, an individual can make the maximum contribution amount to both accounts if eligible.

Roth 401(k) contributions are not subject to any income limits.

On the other hand, an individual is eligible to make a contribution to a Roth IRA only if that individual’s modified adjusted gross income (MAGI) is below certain amounts. This MAGI is based on the individual’s tax filing status. The following table shows the MAGI limits. 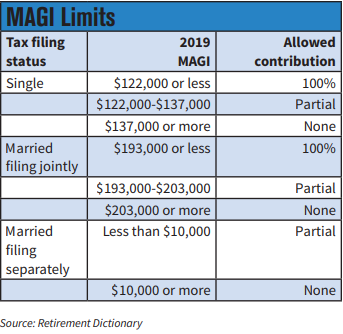 For individuals whose MAGI falls within the phase-out range, calculations must be done to determine the amount of contribution for which they are eligible.

Anyone can establish a Roth IRA; and regular Roth IRA contributions can be made to the account as long as the individual’s MAGI does not exceed the limits above.

Roth 401(k) accounts are subject to the same required minimum distribution (RMD) rules that apply to traditional 401(k) accounts. Therefore, the account owner must start taking RMDs from her Roth 401(k) for the year in which she reaches age 70½ and continue for every year thereafter. If the plan allows, RMDs can be deferred past age 70½ until retirement.

Roth IRA owners are not subject to RMD rules.

Roth IRA beneficiaries are subject to RMD rules. An exception applies to spouse beneficiaries who transfer the inherited assets to their own Roth IRAs.

Tip on avoiding Roth 401(k) RMDs: An individual who does not want to take RMDs from a Roth 401(k), may rollover those assets to a Roth IRA, since Roth IRA owners are not subject to the RMD rules. If any RMD is due for the year in which the rollover occurs, that RMD must be taken before the rollover.

A distribution from a Roth 401(k) is qualified if it meets the following two requirements:

1. the individual has had the Roth 401(k) for at least five years, and
2. is either;
• age 59½ at the time the distribution is made
• disabled,
• deceased, in which case the distribution would be taken by a beneficiary.

Roth IRA distributions must also meet these requirements in order to be qualified, but there are two different distinctions.

• For the second option, a distribution from a Roth IRA is also considered qualified if the five-yearperiod has been met and the distribution is taken for first-time homebuyer purposes. This is subject to a lifetime limit of $10,000.

6. Defining the 5-year period for a qualified distribution

For Roth IRAs, this five-year period starts with the individual’s first Roth IRA. This is because all of an individual’s Roth IRAs are aggregated for this purpose.

Recharacterization occurs when a contribution is changed from a traditional to a Roth or vice versa. A recharacterization must be done by the individual’s tax filing due date plus extension, and must include any net income attributable to the transaction being recharacterized.

Awareness of the differences can help with choice

While you can potentially make contributions to both of these types of accounts in some cases, an awareness of these differences—and of course any similarities—can help to ensure that you choose the account with the features that is more suitable. Awareness can also help to prevent you from choosing an account for which you might be ineligible. For example, if your tax filing status is single, you should not make a contribution to a Roth IRA if your MAGI is $137,000 or more (see table above).

Of course, consideration should also be given to whether a traditional account might be more suitable for you than a Roth account. In order to make this determination, a Roth versus traditional analysis should be done by your financial advisor.