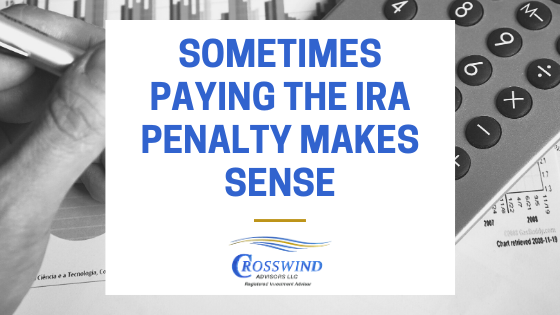 Whether it’s sports, taxes or life, we’re programmed to avoid penalties, and usually that’s a good move. Occasionally, however, by simply avoiding penalties, we can be detrimental to ourselves. Indeed, sometimes incurring a penalty on purpose can be the right move.

I recently met with “Dan and Sue.” They were, in many ways, a typical couple in their 40s. Both Dan and Sue had pretty good jobs and were making a nice living, but between paying for the mortgage on their home and raising their three children, they were pretty much spending every dollar that they were bringing in.

As Dan, Sue and I continued to talk, I was pleasantly surprised at how much the couple had already managed to save for retirement. It turns out, Dan had been a pretty good saver early on and had already accumulated about $200,000 in his 401(k) and another $40,000 in a traditional IRA. Sue also had an IRA worth about $30,000.

When I asked Dan how he was able to accumulate as much as he had “ahead of schedule” when he was just managing to get by, he told me that things weren’t always this way. Dan said that before he and Sue had children, they lived in a smaller home and were able to save sizeable portions of their salaries each year. That, plus the generous match offered by Dan’s 401(k) plan, he said, had gotten them to this point.

Now, however, with things being so tight, Dan had stopped contributing to his plan altogether. When I asked why, Dan told me that if he continued to defer money into his plan, he would be forced to take money from somewhere else to pay his bills, and that the only real places he could tap were $35,000 in a savings account that he was adamant about not touching unless it was an emergency, and his IRA.

He continued on saying that when he asked his CPA about taking distributions from his IRA, his CPA told him that he shouldn’t take them unless he had nowhere else to turn because, given Dan’s young age, those distributions would be subject to both regular income tax and a 10% penalty.

Intuitively, that made a lot of sense. After all, we are programmed to avoid penalties. But thinking back to when Dan mentioned his generous match, the wheels in my mind began turning. I began to wonder if Dan and Sue were missing out on an opportunity, so I asked Dan to share with me some more details about his 401(k).

I came to learn that Dan’s employer was willing to match Dan’s contributions dollar-for-dollar, up to 5% of his salary. Given his current salary of about $100,000, a $5,000 contribution from Dan (in the form of salary deferral) would have netted him an additional $5,000 from his employer.

Instantly, I told Dan to resume making salary deferrals to his plan and to defer enough to get his full employer match. “But if I do that,” said Dan, “I’ll have to take money out of my IRA and pay income tax and a penalty!” He was right, I couldn’t argue with him there, but I encouraged him to take a step back for a moment and look at the bigger picture.

If Dan were to defer $5,000 into his plan, by virtue of his employer match, his contribution would be doubled and he would have $10,000 growing tax-deferred. In addition, that $5,000 401(k) contribution would lower Dan’s income for this year by $5,000, allowing him to take $5,000 out of his IRA without increasing his regular income tax liability at all.

So to sum it up, Dan had two choices. He could’ve continued not contributing to his 401(k), keep his tax bill the same and not add anything to his retirement savings each year (other than, perhaps, gains on his existing retirement money).

The other option was to contribute $5,000 to his 401(k) plan each year to get the maximum match (another $5,000), and take a $5,000 distribution from his IRA to “make-up” the amount he needed for additional living expenses. This would increase his tax bill by $500, but give him $5,000 more in a retirement account growing tax-deferred.

Although it’s important to have a general awareness of tax issues when contemplating retirement, there is no substitute for consulting your tax advisor for advice specific to your individual situation.

For Dan and Sue, it was an easy choice. They would “be happy to pay the penalty” in order to continue bolstering their retirement savings each year. So what’s the moral here? That paying a penalty is a good thing? No, of course not. The message is simply this...

When it comes to taxes and your planning, things are rarely black and white. There is no such thing as “always” or “never.” It is usually a good idea to avoid taking pre-59½ distributions from your retirement account so you can avoid a penalty, but there are exceptions to every rule. Here was one of them. So, just remember to always look at your situation from many different angles and figure out what, in the overall scheme of things, is best for them and their family.